All Action assemblies begin with an Action module that defines input data fields for the action to process: 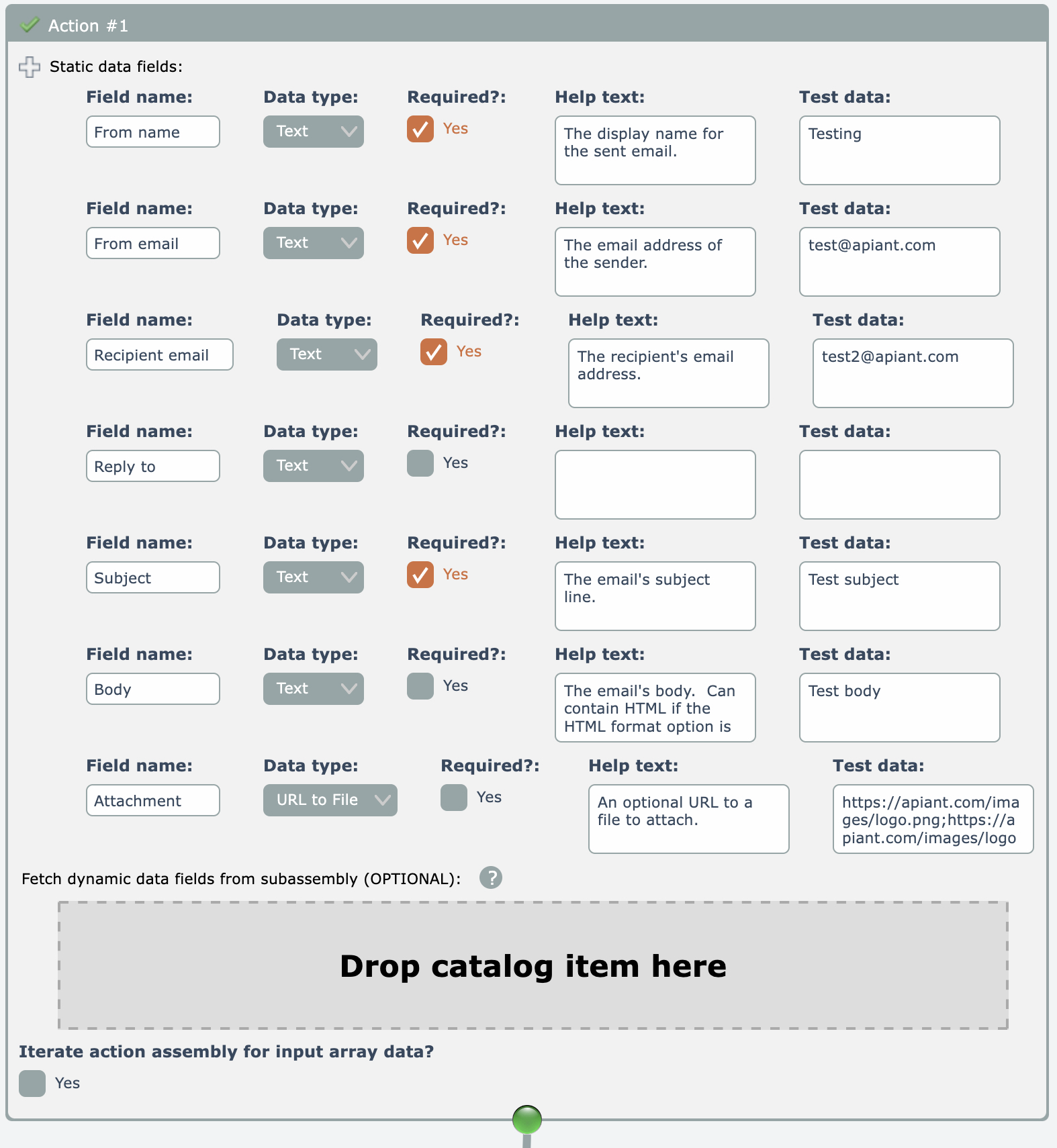 Static input data fields can be typed into the module and configured manually. Generally this is only done when the action has a relatively small number of input fields.

Dynamic data fields can be loaded from a nested subassembly.

As an example of when dynamic fields must be loaded, consider a spreadsheet action to write a new row. The action doesn't know which columns are available until the sheet is inspected via the API and its columns are determined.

Rather than keying in and configuring a lot of static data fields by hand, you can create a subassembly and use the Data Streams – Create From Text module to configure the fields from static XML data, which can be easier to create.

The outputs from the Action module are then typically formatted for sending to the API. The JSON Builder and XML Builder modules can be helpful for formatting simple API payloads. Complicated JSON/XML formatting usually requires custom coding via the Extension – Server-Side Script module.

Once data is formatted in the manner needed, the API is invoked via the HTTP or OAuth Transaction modules, or one of their variants.

After invoking an API call, the action should check for any error conditions and raise a fatal error if the API call was unsuccessful: 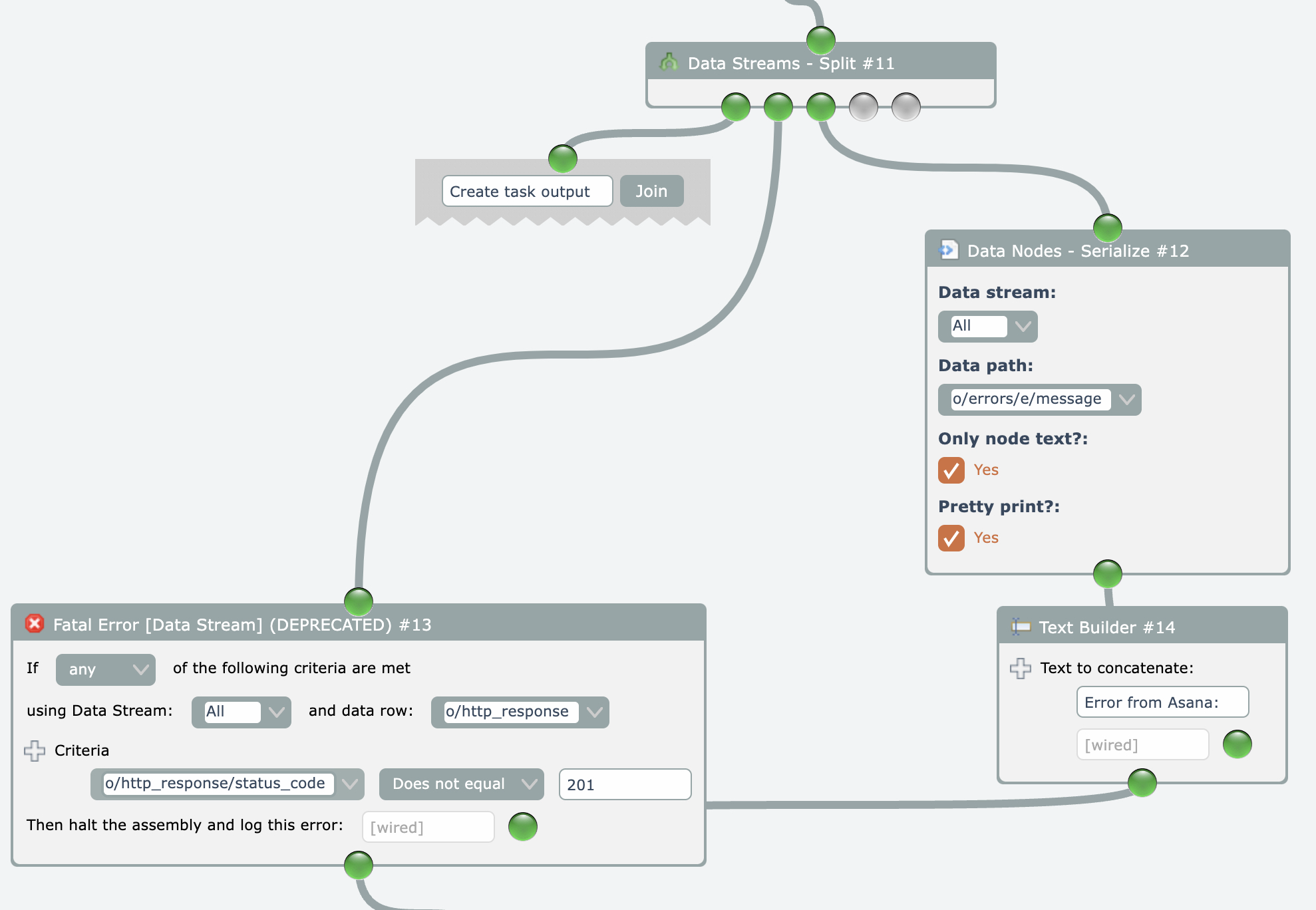 Actions must catch and throw all error conditions in order for the transaction to be flagged as an error in the automation’s history and for alert processing to be performed.

The proper way to do error checking in an Action is to test for the absence of a successful result from an API call. For example, if you are adding a new contact to a CRM then check the API’s response to ensure that the new contact ID is returned. Or test for the HTTP status code the API uses to indicate success.

Some actions need to indicate to the system that the trigger data row should be skipped rather than retried. For example, an action that checks for existing duplicate data needs to skip the trigger data row if a duplicate exists. The Action - Skip Data Row module can be used within a Conditional module for this. 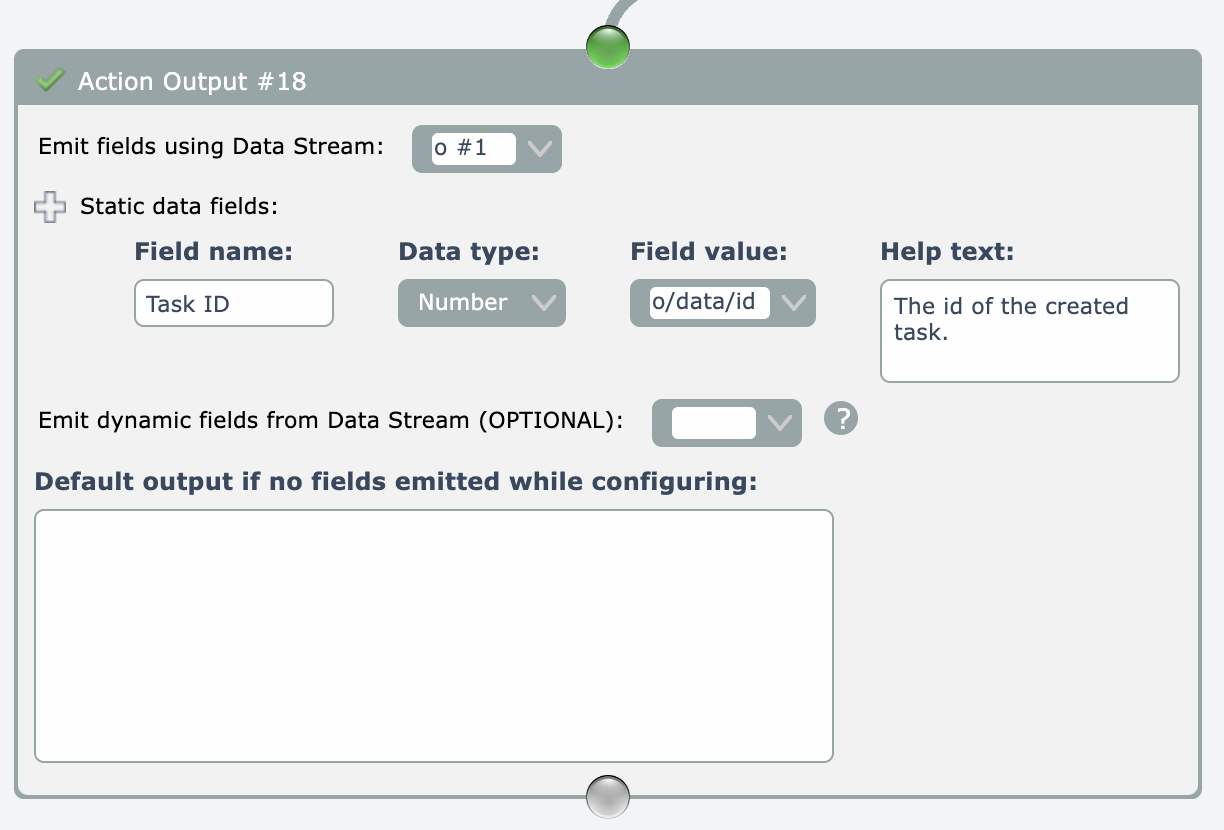 The output data fields can be used as inputs to subsequent actions within automations.

Similar to the Action module, output fields can either be statically typed into the module or they can be determined dynamically. 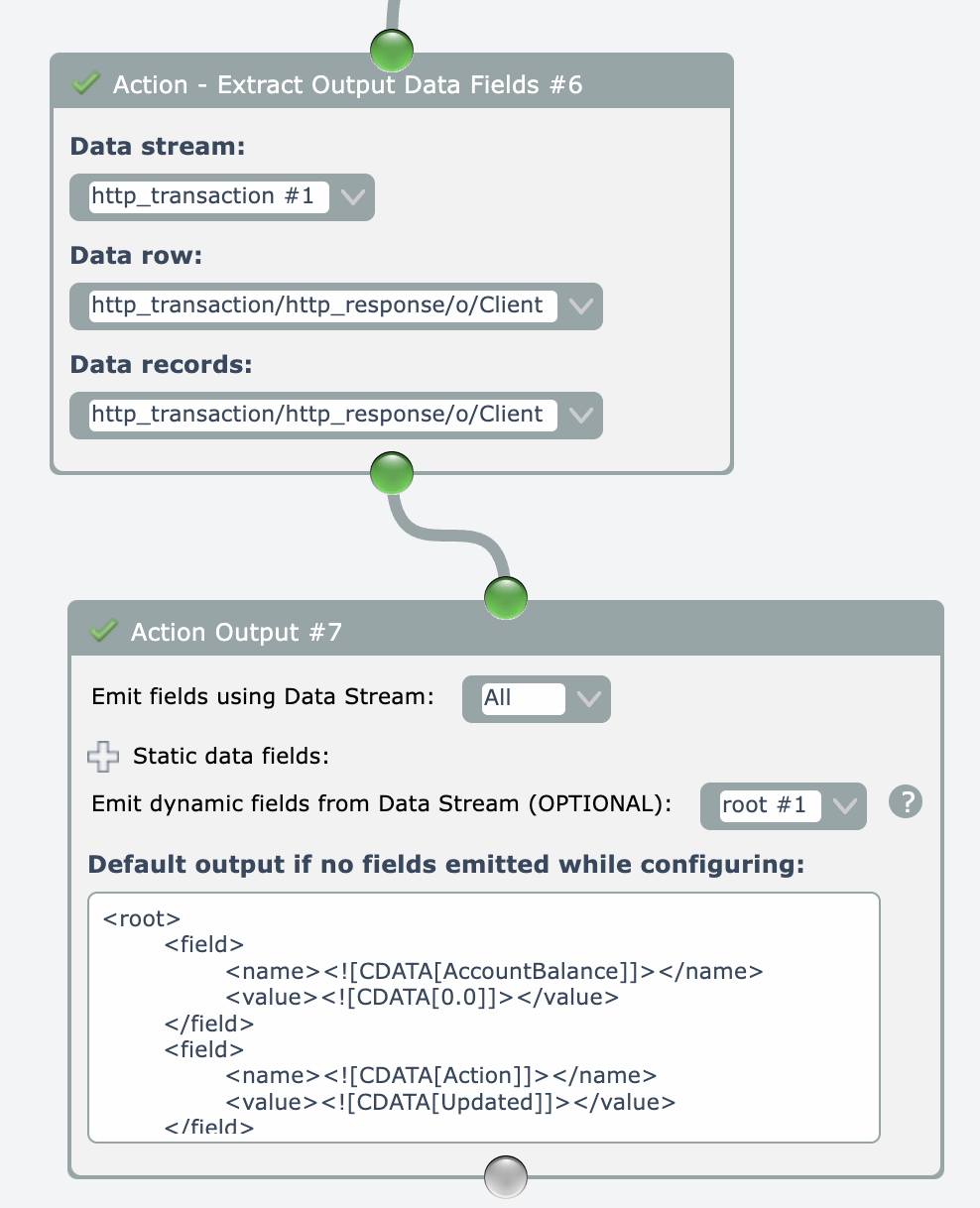 If an Action Output module emits dynamic fields, the action assembly is executed in the Automation Editor when configuring the automation in order to determine the mappable fields. The action must not perform any API calls that modify data! Use the Utility - When In module and Conditional modules to control processing that occurs when configuring the action in the automation editor vs. its behavior when running in an automation. See the Zoom "get meeting" action for an example of this, uuid = 073aac7ff0d2447c87ed298aa4032213 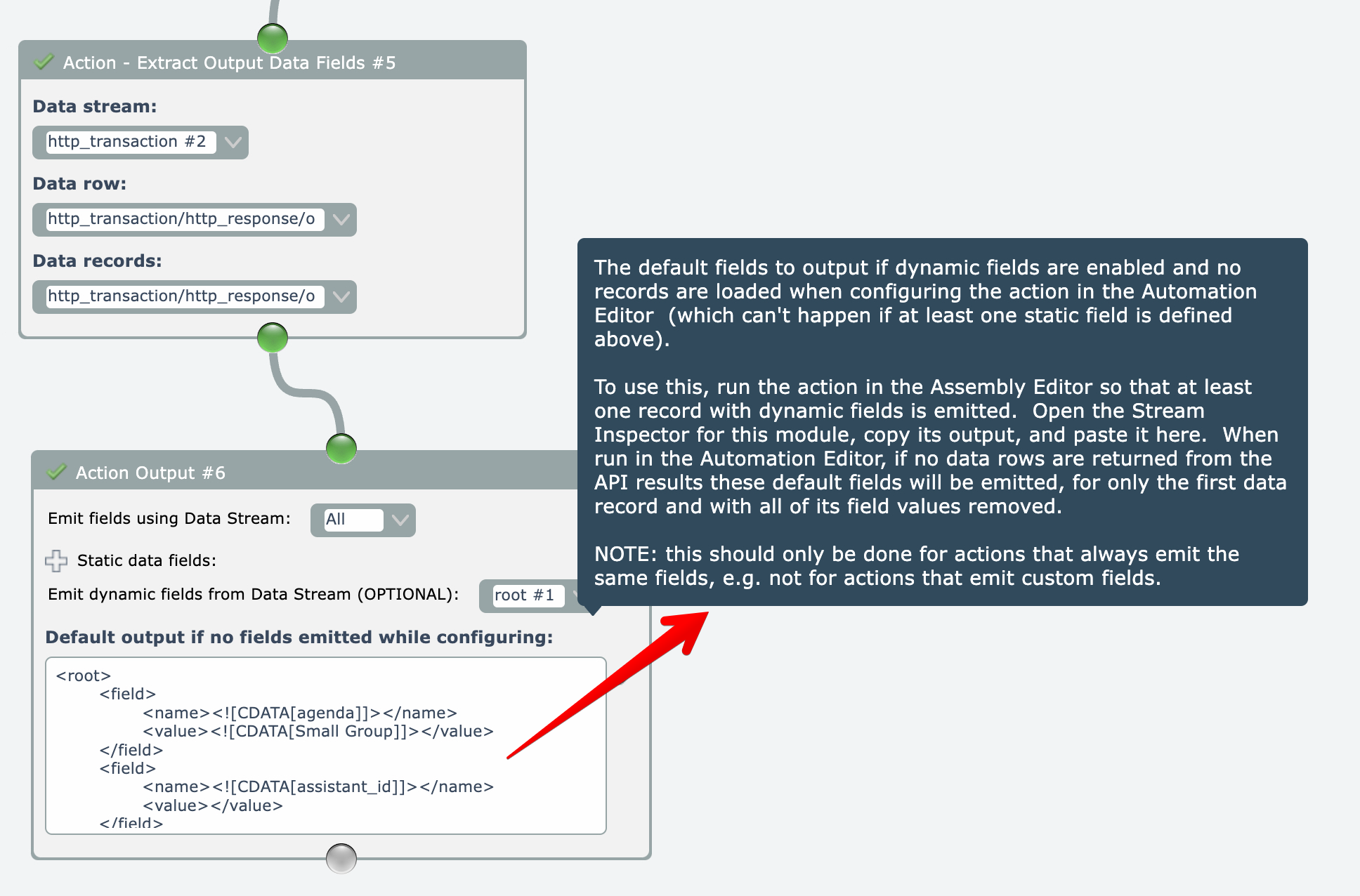 Updated 05 Jul 2022
Did this page help you?
Yes
No
UP NEXT
Trigger Assemblies
Docs powered by archbee